Written by SandpaperMarketingAdmin on December 3, 2014. Posted in lifestyle. 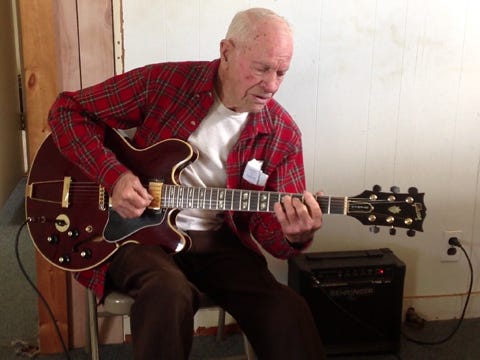 Veteran of World War II and long time musician, Clifton Lassiter will be 95 years old December 13. Family and friends of Lassiter are asked to join him November 29 at Cobbtown Holiness Church at noon with a dish to celebrate an icon of the Cobbtown and Jay community.

Lassiter began with his life with an interest in music. He said his parents told him he started his singing career at four years old in Bagdad.

“I always loved music,” he said. If not for his family moving a lot when he was a child, he may have divided his love of music with football, an early passion of his, he said. “I was very active. I could jump nose high. I wanted to play football,” he said. However, a move out of Century ended his chances to move on to high school football since Lassiter’s education, he said, stopped with 8th grade. “There were no buses to get to high school,” he said.

According to Lassiter, his friends and family, as well as hearing Gene Autry on the radio inspired him to play. He said his friend Oscar Nowling was the first in Cobbtown to get a radio and he could listen to the Grand Ole Opry on it. His friends Jack and Bob Cobb and he had plans to play there themselves; they just needed instruments first. Oddly enough, Lassiter’s habit of smoking he picked up as a teenager led to him getting his first Silvertone guitar. He said his mother promised him a guitar if he would quit. She bought him a calf, he said, which he raised to a yearling, sold to local businessman Ted May, and bought the guitar for $9 from Sears & Roebuck. He said he took a 5-minute course and learned some chords and the rest he learned by ear. “I never learned nothing about music,” he said. Lassiter said he got the opportunity to play some dances with his father, a fiddle player, once he learned his guitar.

Lassiter tells his story of 2 years, 9 months, and 23 days of military service as if they were yesterday. He said it was his father and Nowling who brought him his orders January 2, 1942. “They messed up a good hunt,” he said. Lassiter said he was inducted at Camp Blanding in Starke, FL. Some inductees were rejected for health reasons, he said, but he was accepted despite a bad left eye. Lassiter said he was told, “Right handed, right eyed, send him on!” Shipping off to Fiji from San Francisco, Lassiter said, “I watched the Golden Gate as long as I could. I didn’t know if I would see my friends or see my parents again.” At the time, Lassiter was 22 years old.

Lassiter barely touched on those he lost in war at Guadalcanal and the New Georgia group of islands. Almost 70 years later, those memories and pain are still just below the surface. A bullet through his calf on his left leg he said sent him to the New Caledonia hospital and then home.

Once he healed up, Lassiter said he learned how to weld and got a job building ships in Mobile until the end of the war. Afterwards, he said he got a job cutting trees away from power lines.

In the war, Lassiter said he promised the Lord if He spared his life he would seek Him. Lassiter said he made excuses not to go to church with his first wife but she convinced him to go to a revival where he met an 80 year old missionary.

“The power of the Lord fell that night,” he said. Lassiter said he was saved around 1955 at the same church, Cobbtown Holiness Church, where his grandson, Jim Lassiter preaches today.

Lassiter’s niece, Janice Matthews, said to this day, Clifton still drives, still runs his tractor, and always has huge gardens, from which he gives gifts to people in the community. Lassiter ended his interview with a Fijian song he still remembers all these years later in the native tongue.

Lassiter also wanted to thank Commissioner Bob Cole for the role he played in the formal presentation of Lassiter’s Purple Heart award. He said he did receive it but Matthews said he never had an official recognition until two years ago. Lassiter said Cole’s been a wonderful friend to him and Santa Rosa County is very blessed to have him as a county commissioner.