Walking in Milton, meandering down Elmira and Berryhill Streets

Written by SandpaperMarketingAdmin on September 2, 2014. Posted in lifestyle. 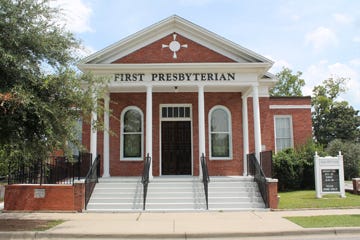 Elmira Street is one of the most historic blocks in downtown Milton.  Considering the beauty of the architecture and gazing at the oldest church in the county, it can give one the feel of what the town must have been like a hundred years ago or more. Strolling the street and passing the city fountain, the First Presbyterian Church stands stately and reserved. The building was erected during Reconstruction, just after the Civil War. According to the Santa Rosa Historical Society’s book written by Laurie Green, the church was constructed in 1868 with a congregation of 28 charter members. The building has since lost its steeple, added rooms and was bricked in 1927. Next door to the church is the R. J. Allen house at 5194 Elmira Street was built in 1917 by a downtown merchant and is unusual because of its brick construction. According to local historians, the fence is the only remaining brick and pipe designs left in downtown. Straight across the way is Berryhill Street with three beautiful antique homes and another historic church. The W. J. Williams House at 6810 Berryhill Street is Milton’s only “steamboat house.” Laurie Green refers to it as such, taking the name from the bow veranda that wraps around the front, she said in her book, much like the deck of a paddle-wheel riverboat. The home was built in 1887 by Wiley Williams, Sr. Historians concur the roof and second floor of the residence was lost in a fire in 1928 and has since been renovated by other families.

Next door is the Milligan Whitmore house at 6824 Berryhill Street. The architecture of this home is considered to be Victorian and built in 1889 by Captain Rufus Milligan, a partner in the Milton Mill. It was purchased and used by Dr. Rufus Thames as a hospital for a time and Sheriff Henry Clay Mitchell bought it in 1927 to convert into apartments.  At 6830 Berryhill Street the First United Methodist Church proudly sits waiting for worshippers to gather. The original First Methodist was on Conecuh Street where the parsonage sits today but burned in 1904, when, according to historians, a carless smoker started a fire in a neighboring home, burning three structures, including the church, to the ground. The current structure was completed in 1936. Across the street is the Collins House at 6819 Berryhill Street which was built in 1905 and is currently used as the First United Methodist Church office. Heading back up the street you can’t miss the McWhorter-Lynn house at 6760 Berryhill Street. The home is built in the popular Greek Revival architecture, so popular in antebellum homes built before the Civil War. This home was erected in 1857 by George McWhorter, a railroad and lumber company lawyer. One story was added in 1876. McWhorter died in 1891 after being the school superintendent, Florida House Speaker and Chief Justice of Florida’s Supreme Court. His family added on another room and replaced the wing with a two story addition. The house was sold in 1924 to mill owner William Lynn and is still owned by his heirs.