Written by SandpaperMarketingAdmin on November 6, 2014. Posted in entertainment, local. 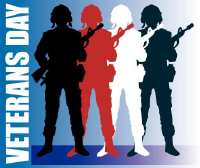 Governor Rick Scott announced this week that in honor of Veterans Day, there will be free entry for everyone at state parks* on Tuesday, Nov. 11. The Florida Park Service encourages residents and visitors to celebrate veterans and active military personnel by bringing them to one of the 171 state parks and trails to enjoy outdoor activities.

Governor Scott said, “This Veterans Day, I encourage all Florida families to get out and enjoy Florida’s natural treasures at our wonderful state parks. We also honor our veterans and thank them for their service and sacrifice they gave to protect our state and nation.”

“Veterans Day is a perfect opportunity to visit Florida’s award-winning state parks,” said Donald Forgione, director of the Florida Park Service. “Spend the day hiking, biking or picnicking with a veteran – and most importantly, thank them for their service.”