Written by SandpaperMarketingAdmin on January 19, 2016. Posted in lifestyle. 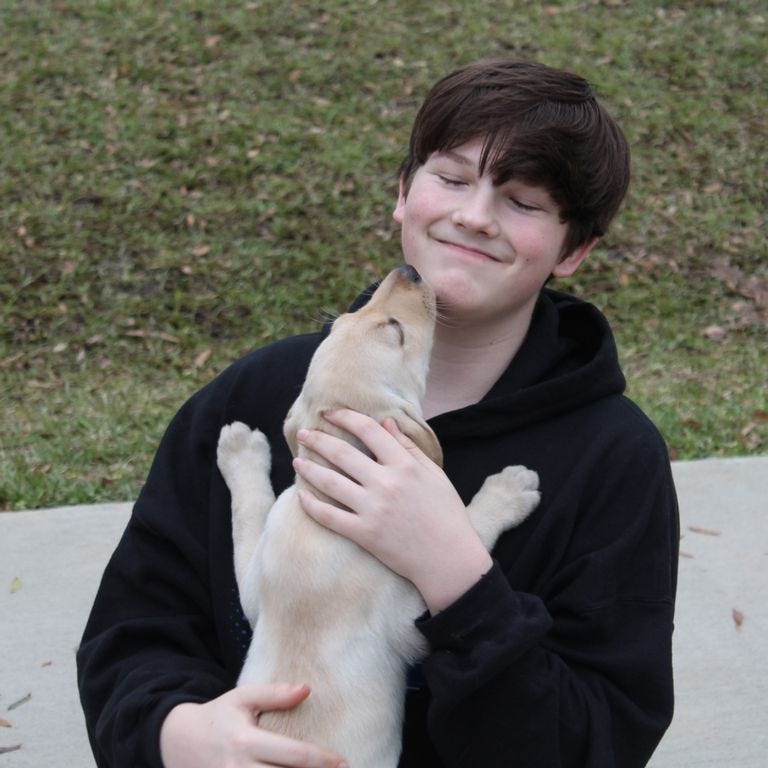 UPDATE: Kelton chose his diabetic alert dog, a yellow lab he named Axel, January 8 at Ferry Pass Animal Hospital in Pensacola. He chose from two puppies after some interaction time and now Axel begins his 18-month-long training with trips every three months to visit his future charge.

In a fenced in area next to the veterinary clinic, Bill Creasy, trainer of diabetic and other service dogs, entered with a pair of labs, a black one and the yellow one. Creasy's purpose was to see which of the two took to Kelton the most. By all accounts, Axel did just this.

Both Kelton's mother and father, Michelle and Cray Stephenson, were there. Between the two, Axel will be in experienced hands as Michelle is a veterinarian and Cray spent years training hunting dogs. He also happens to be an insulin-dependent, type 2 diabetic himself.

Cray explained he is hypo aware, or sensitive to low blood sugar levels. "When I go low, I know it and I will wake up and do what I need to do in order to correct that and Kelton is not and so that's what's made it so scary. He will sleep through a low (blood sugar) and just continue to get lower. Potentially, that could kill him."

Since Kelton's diagnosis December 27, 2014, his parents have had to endure nights of little sleep constantly waking up to check Kelton and his blood sugar levels. Cray said he's looking forward to the dog being able to alert Kelton before he even dips dangerously low.

While Kelton has his dog picked out and training is underway, the Stephensons are still working on acquiring the money to pay for Axel. They have a GoFundMe page  to accept donations toward the $20,000 it will take to train the dog and cover additional expenses. As of January 19, they're a third of the way toward their goal. The Stephensons also have an account at Pen Air Federal Credit Union under Kelton's name.

Kelton Stephenson faces many of the same challenges at Hobbs Middle School as his peers from exams, to social situations, to learning new band music. However, his mother’s greatest fear for him threatens in the dead of night, when his blood sugar has the potential to drop so low he could fall into a coma or worse. To combat this fear of what Kelton’s type 1 (T1) diabetes can do, the Stephenson family is working on acquiring a diabetes alert dog (DAD). Better than the expensive modern technology regulating Kelton’s numbers and insulin, this dog will be able to sense highs and lows for Kelton and let him know something is wrong.

Kelton’s mother, Pace Veterinary Clinic Dr. Michelle Stephenson said not all diabetes is the same. According to the American Diabetes Association, statistics from 2012 estimated 29.1 million Americans, or 9.3 percent, had diabetes, the most common form of the auto immune disease being type 2 (T2). For this type, the body is resistant to insulin, the hormone responsible for regulating glucose (sugar) in the blood. Most T2 patients manage their diabetes through medicine and diet. While diet is critical for Kelton, he needs more help.

As a T1, Kelton represents five percent of those 29.1 million with this more rare form in which his pancreas does not produce insulin. He has to use two devices to manage his blood sugar levels, a monitor attached to his leg to read his sugar levels, and a pump attached to his side to deliver the insulin. He walks a fine line between lows (hypoglycemic) and highs (hyperglycemic) with danger on either side. Michelle said, “The drug he needs to live can also kill him if it’s too much.” The same is true of the sugar his body needs for energy.

So why does Kelton need a dog trained to alert him to dangerous glucose levels at the cost of $16,500? Normal blood sugar levels range between 80 to 100 mg/dl. While he’s awake, he can feel when he’s off. He said when his blood sugar goes below 60, his fingers feel tingly, his body feels shaky, and overall he feels weak and tired. His mother even has his glucose monitor tied to her smart phone to alert her of his numbers. However, he sleeps hard enough not to feel when he’s low. Michelle also noted his tools rely on battery power and internet signals, all of which can go wrong. She said what shook her the most was the nurse explaining DIB, “death in bed.” According to the American Diabetes Association,  diabetes is the seventh leading cause of death in the United States.

Creasy said with diabetes, it’s all about scent. “We put off an odor, a different odor for a low versus a high.” Kelton will send him a swab of the inside of his mouth when his blood sugar measures around 70. Creasy said, “What I do is I capture that odor with a scent sample, and that is what I use to train the dogs.”

“I’m amazed at every dog I train,” Creasy said. A dog’s sense of smell is keen enough to know a diabetic’s blood sugar is dropping and will alert before it reaches dangerous levels, according to Creasy. “They pick up on these sudden changes, it's amazing to me because I've been with a lot of educated people…Scientists don't know how they're doing it.”

In the first week of January, Creasy said he will pick up Kelton’s dog in Texas, a Labrador retriever puppy and begin scent training immediately, the beginning of an 18 month process. Coming to the Stephensons in Pace or the family going to Creasy in Kingsport, Tennessee, they will all work together throughout letting the dog get to know the family. Creasy noted his entire training is positive without a collar or leash.

Part of the dog’s teaching will involve public access training in different kinds of places such as stores, restaurants, automobiles, trains, elevators and such. “I train them to alert regardless of the situation, no matter where they’re at or what they’re doing, I teach to constantly check for the odor only.” Creasy said a family can even be watching a diabetic child play baseball and the dog can sense from the stands and alert the parents.

For the last five months, Michelle said she’s regularly awake between midnight and 5 a.m. when her phone alerts her to Kelton’s lows. She said she will be grateful when Kelton has a way to be alerted when he’s in a dorm one day out on his own.

Learn more about Creasy’s work by following him on Facebook under Ouch G’Bang Workingdogs, named after his own dog’s past bloodline. Creasy has links there to more of Kelton’s story as well. Creasy also has a website at www.ouchgbang.com.