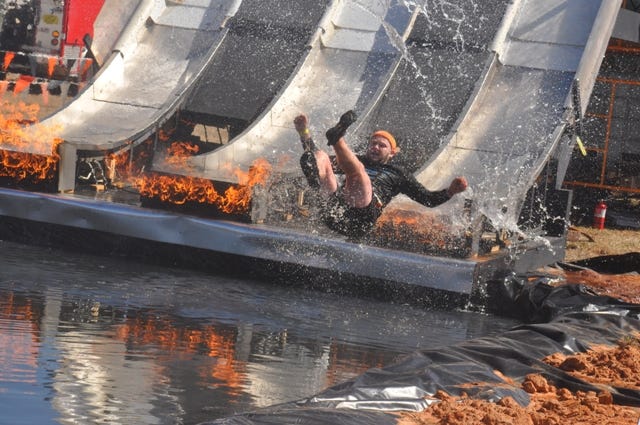 Tough Mudder may not return to Santa Rosa County if alcohol sales aren’t allowed for their Sunday events. United Way Director of Development Kyle Holley said he will not know for a few weeks if they will return in 2016.

Traditionally, Tough Mudder gives its participants a free beer at the end of its roughly 11-mile, grueling obstacle course through mud, freezing water, and tear gas. The same happened at Saturday’s event, but Tough Mudder normally runs the whole weekend. This globally renowned company may not bring its unique, outdoor experience back to the county without some way to sell TM’s refreshing reward throughout the whole weekend, including the Lord’s day.

Initial estimates for participants alone surpass 5,000 according to Holley. They came from as far west as California and as far north as Montreal. Though final numbers are not in yet, Holley said a few more people came than were expected for a single-day event. The participants were happy with the event according to Holley. He said he heard from legionnaires, those who had run the course before, the course in SRC was a better course than what they had been on before. Quite a few participants came from South Florida, he said, who  thought nothing of driving six hours and staying the night and going to the beach the next day. “I was excited to hear while people were running saying thank you,” Holley said.

The land owners were overall satisfied with the event, according to Holley. He said, “They felt pretty good about it. If Tough Mudder would like to come back, I believe they would be welcome…It was their pleasure to encourage an event like this to come to town to help other people…They feel like they were able to give something special to the community,” he said.

Finding out how pleased businesses were with Tough Mudder’s event Holley said has yet to be determined. Anecdotally, he said he saw over an hour wait at the Texas Roadhouse Saturday night, and hotels on Highway 87 were sold out. “I would guess other restaurants saw a lot of business, too.”

Santa Rosa County Commissioner Rob Williamson said he’s still waiting on the economic study to make definitive decisions about Tough Mudder returning next year. He said the tourism sector of Navarre Beach thrives where alcohol policies are less restrictive. He said, “I struggle a little bit because I feel that's that the role of government to provide a level playing field and get out of the way. I’m wondering if instead of a playing field providing competitive advantage to neighboring counties. In District 4 it's a clear competitive advantage.” He said some kind of one or two day exemption is something definitely worth discussing, “but I'm not sure if the rest of Santa Rosa County  is ready to adopt that type of expanded alcohol consumption policy.”

Commissioner of District 2, Bob Cole said he hasn’t considered discussing the county’s alcohol policy and isn’t sure where he would be on it.

“In the past I’ve been against that so I’ve got to talk to the rest of the board,” he said.

A table of free beer awaited just past the finish line, for the muddy, worn out participants, but sits just out of reach for any business who may offer alcohol on both Saturdays and Sundays. “Alcohol is the most important question, a question we cannot answer right now,” Holley said. He said talks are going on with Tough Mudder about extending the run into a two-day event. From a tourism perspective, he said the TDC would like to find a way to accommodate the needs of TM as well as their sponsors, Anheuser-Busch InBev’s Shock Top this year, to make this happen.

Holley said, “This may be the time to fully value tourism and value special events with a zoning overly along the main tourism corridor, which is Highway 87, connecting the beach to the state forest, that would allow for beverage service, and allow incentives to attract new hotels. We need to attract more hotels and attract more events to drive traffic, particularly in the shoulder season.” Holley noted TM landed in SRC in early spring, “when our beaches and small restaurants need the business.”

“The impact can’t only be measured by dollars from a single day, but also awareness from visitors to our area for the first time,” Ogletree said.

Holley said, “We do hope that our community sees this as huge company with an infinite reach of an ideal demographic. The people were so polite. They were clean. They did not stir up the place. They did not litter. There was no big after party…TM reports no major injuries. They met their safety mark. That's great.” By the end, he said there was nothing negative about TM coming to Santa Rosa County. “This is an example of the teamwork we need: private sector, local business, tourism and government. There’s no question we live in tough times, and certainly no question teamwork is the answer to overcome obstacles in these tough times.”