Written by SandpaperMarketingAdmin on February 19, 2016. Posted in lifestyle. 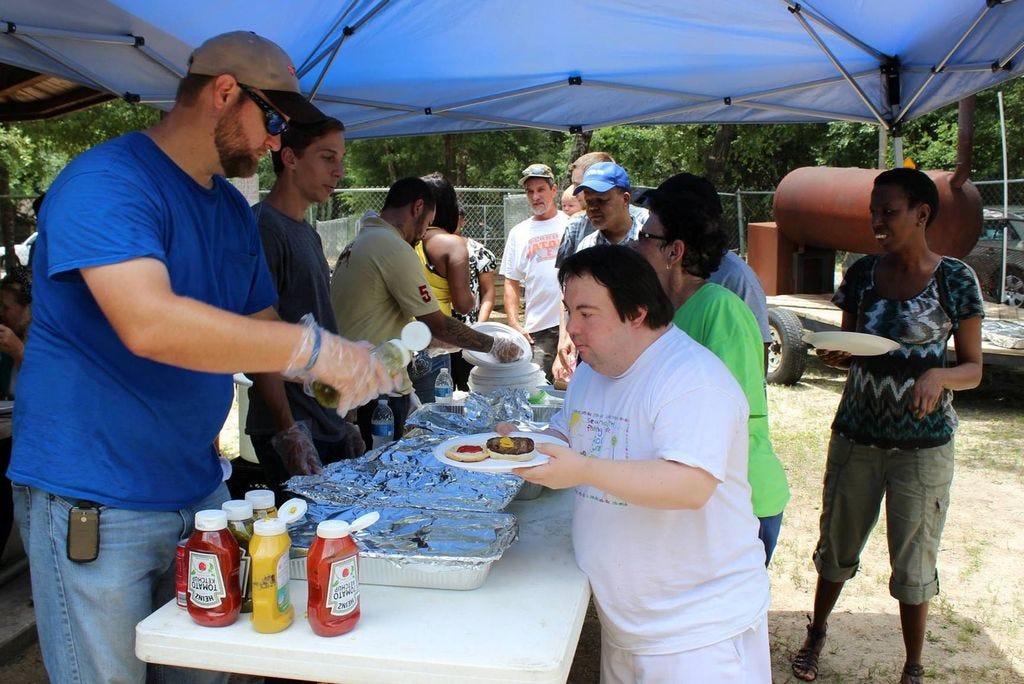 There is a little red schoolhouse in East Milton at 5292 Richburg Street across from Greater Bethlehem AME Church. It represents not only a divisive time in U.S.  history, but also one of unity.

The Magnolia Educational and Recreational Center was the school established for the African American students in the area during segregation.

Today, the center holds Camp Magnolia for any children in the area ages 6 to 13 years old during summer months.

La Tasha Walls, who helps coordinate CampMagnolia, also collected as much history of the old school as she was able.

According to Walls, the school began in the 1940s with an acre of donated land from Robert Talton. The one room building, built by Obie Robinson and named the MagnoliaSchool was open in 1942.

After the U.S. Supreme Court struck down segregation in “Brown vs. the Board of Education of Topeka” in 1954, the school was eventually abandoned.

The children were transported by a newly acquired school bus to T.R. Jackson School.

Since the school was a vital part of the community and the county’s history, in 1981, plans began to make the old schoolhouse into an educational and recreational center.

Because of the efforts of Willie Bailey, Haywood Cawthon, O. C. Rushing and B. W. Ellis, the school was deeded to St. JohnDivineMissionaryBaptistChurch, Greater Bethlehem African Methodist Episcopal Church and BethlehemPrimitiveBaptistChurch.

In more recent history, 2014, the MagnoliaCenter received the Community Award in recognition of excellent service to the Milton Community from the SRC Fellowship Churches Pastors and Ministers’ Wives Organization.

Walls’ said the MagnoliaCenter today holds CampMagnolia for any area youth, 6 to 13 years old for the entire summer for a one-time fee of $25. She said, “The camp first started in 2007 and then disappeared for awhile and then came back in 2010 and has been going ever since.”

The main thrust of the camp is exposing children to what exists outside their neighborhood. Walls said, “We take them on field trips around the area. Over the years we've taken them to the library, Skateland, the Ridge for the free summer movies, Arcadia Mill, Sweet Seasons Farm corn maze and once a week, they would go to MiltonCommunity center to play in the gym. The past few years, they were receiving tennis lessons during their visits.”

However, the camp is not just about fun. Walls said the center seeks improvement in students’ grades through tutoring. Trips to the county jail also, she said, encourage youth to stay in school.

While Walls said she does her best to keep up with camp attendees years after camp, she tells them “Mrs. T does not make jail visits.” She said she still keeps in touch with campers who are in their twenties now on her Facebook page.

Support is hard to come by for the center, according to Walls, but the camp does get help.

“Every year we have supplies donated by Three Rivers Resource Conservation & Development Council, Inc. And ThreeRivers and USDA sponsor a pre Independence Day / camp kickoff cookout for us every year before we take a week off for July 4.”

Over the last few years, Walls said, “the kids usually get together and perform. It’s open to the public. They sing about three songs and have named themselves The Magnolia Voice.”

Walls wants to see more participation at the center, ideally year round.

“We are part of the back to school bash with MIA, Ladies of Essence and the Masons. And we're part of the community Thanksgiving dinner that is now named after my dad, Deacon Leon Walls from St John Divine Missionary Church…We are trying to get more community involvement so we can do more, but it’s hard.”

Walls stresses the center is open for everybody “white, black, old or young.”

While the center has primarily served children, she’s looking to get more activities and programs started for adults. For example, she was excited to see Little Free Libraries pop up in the county and desperately wants one at the center. Her dream is to eventually be able to tell people the center is booked up.

“A lot of people can’t pop up to Milton and Pensacola,” Walls said, and so she’s looking for growth at the Magnolia Center where people can learn skills like sewing or dance, have access to multiple computers and get help with services like Department of Children and Families benefits.

“We want to be our own little community center with things going on to help everybody…We want the wow of the big city in the little city. We want to bring culture to East Milton.”