Written by SandpaperMarketingAdmin on July 10, 2014. Posted in entertainment, local. 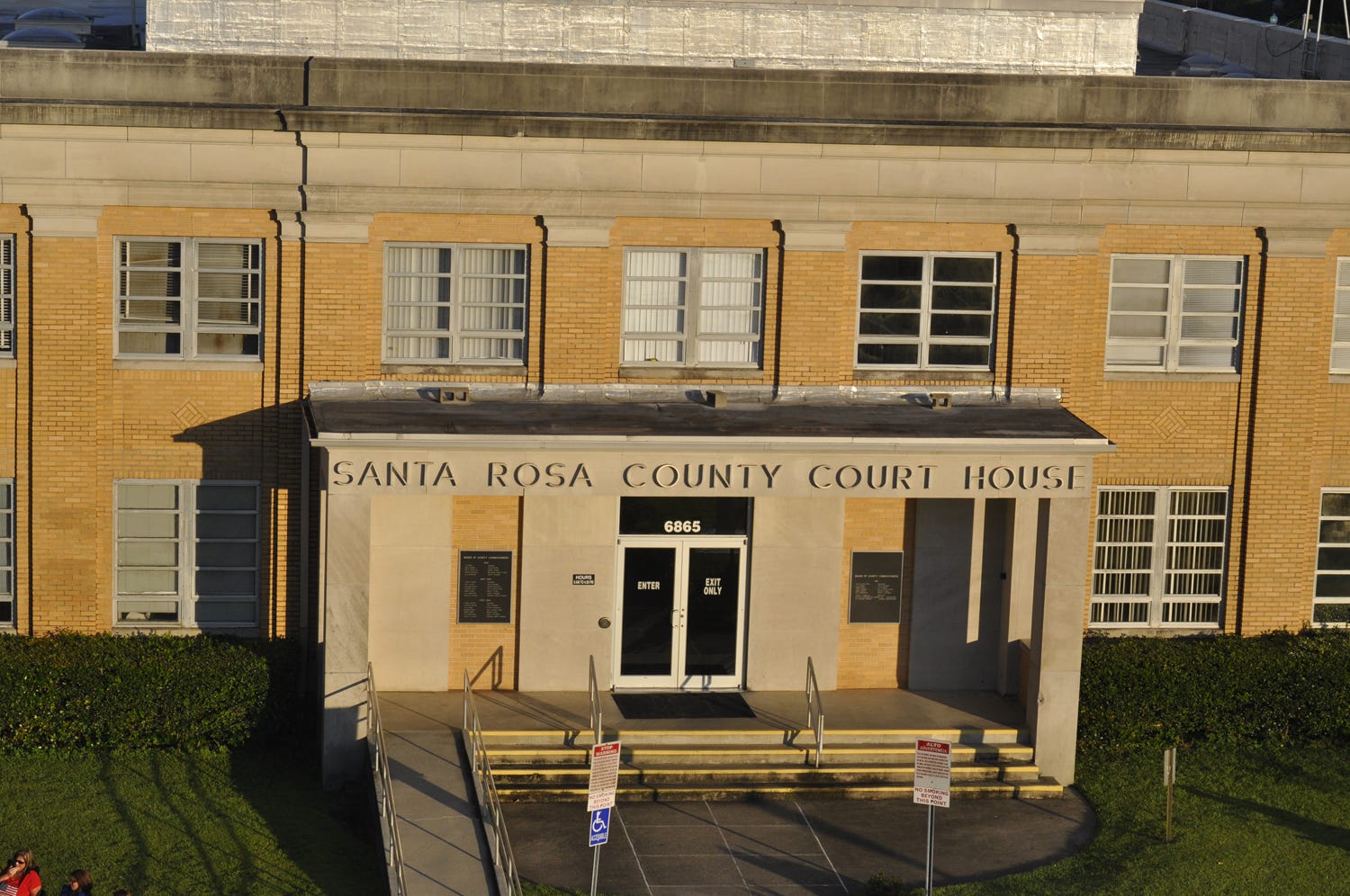 Michael Broussard with Hatch Mott MacDonald, an engineering firm working with the design firm HOK, presented an update to the Santa Rosa County board of commissioners Monday. The presentation was in regards to the proposed site in downtown Milton for the new county courthouse, specifically covering parking, the current building, and the property owners in the area.

Broussard said, “We have in this particular layout spaces for about 210 parking places, so it really doesn’t compare to the other sites. You have less parking.” However, he said, after working with the city, there should be no issues getting around 200 spaces for parking, which could include shared parking.

Another point of concern Broussard addressed was the current courthouse. “The way it’s laid out right now, the existing building stays in service with minimal impact. One advantage is we do allow with this particular site the future use of the historic courthouse for growth.” he said.

Commissioner Jayer Williamson broke down the pros and cons to the Pea Ridge, downtown Milton and the East Milton sites as gathered from the 50 attendees at his July 1 town hall meeting. To the cons for the downtown site, he said citizens questioned building in a flood plain. As to the pros, he said, “The city would help with fees to keep the cost lower.” Williamson said, out of the 38 people that voted for the sites at his meeting, 37 percent chose East Milton, 16 percent chose the downtown Milton site, 23.5 percent chose Pea Ridge, and 23.5 percent dismissed all three sites.

Broussard addressed the flood plain issue.  With the current design, he said, the building would sit further south so the grade would put the main floor at eleven feet above sea level, one foot above flood plain.

Buying the property downtown was another con for the site Williamson repeated from his meeting. The five property owners there, covering the three acres needed for the courthouse, Broussard said, would be the biggest challenge. “We didn’t see any constraints from being able to fit the courthouse there, get some parking, having a nice, functional site, with the only constraint being the property owners. You have to acquire property somehow, somewhere immediately adjacent to the area,” Broussard said. Otherwise, he said his firm could find no other problems placing the courthouse at the site.

Commissioner Bob Cole addressed the property owner concern by referencing the parcel on the east side of the proposed site. “That’s already well underway with plans for a restaurant to be built there,” he said. He also brought up the parcel lying on the north side of Pine St. at corner of Pine St. and Willing St. “They inherited that from their family and have no intention of selling that property whatsoever,” he said.

Commissioner Don Salter echoed those reservations saying, “I continue to have concerns about trying to force the courthouse on that location, especially with five property owners, but I’m willing to wait for the July 21 meeting. I think that’s when you all will come back with additional information for us.”

The public speaking Monday echoed the sentiments they’ve voiced before. Many citizens strongly oppose the county spending money for property when the county already owns land. Jerry Couey, speaking at the public forum said the Pea Ridge is a bad deal at $63,000 an acre. Sam Mullins said, “Please put property on the ballot that we’re not going to have to spend millions of our taxpayers’ hard earned dollars, my hard earned dollars to purchase.” At a minimum of words, Wayne Smallish spoke during the meeting and said, “I’d like to reiterate what I’m hearing, too. If you’re going to buy more property, people will vote against the tax.”

Matthew Hargraves, a participant in the City of Milton’s taskforce spoke in support of Williamson’s town hall, as did several other citizens who spoke. He later said, “The task force is currently working on developing a communications and public awareness strategy for the lead up to the November referendum.”

The November 4 election is more than three months away, but Angie Jones said the commissioners have by August 29 to turn in the final ballot language to the supervisor of elections. Couey said, “I want to remind everyone again we are cutting it close on time here. Consistently, every meeting I’ve been in, the overwhelming majority of folks I’ve talked to say the board of county commissioners should pick one, [a site]. My fear is, if we put this on the ballot and we don’t get it right, it will be another two or three years before we get a shot at it again.”