Written by SandpaperMarketingAdmin on July 28, 2015. Posted in entertainment, local. 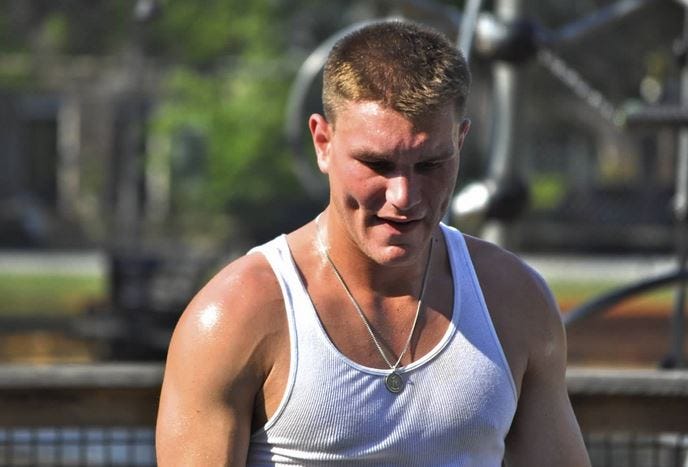 In addition to getting hosed down by water guns, water-filled balloons, the upcoming event will also feature fire trucks spraying tunnels of water for participants to run through.

“This is the first one with an outside theme and that is because the families wanted something fun,” said Glen Hill, chair of the Thomas Cameron Memorial Foundation. For the past four years, the foundation has organized a benefit 5K event which continues to honor not only Cameron but the many other military aviators who have died while serving.

Hill said the main goal of the foundation is to offer any financial assistance to area families of fallen aviators.

The foundation is named in honor of Cameron, a native of Portland, Oregon, who died in a helicopter crash on February 28, 2012 along with four other crew members during a training exercise. Cameron was only 24 years old at the time.

Prior to his death, Cameron was known for giving back to his community, especially during his tenure of flight school at Naval Air Station Whiting Field, Hill said.

“Thomas spent his time in our community mentoring children, young men who were getting out of juvenile delinquency programs (and) helping young men get their GED’s,” Hill said. “He just did a lot of work in the community while he was here in flight school.”

While Cameron was known for his love of sports in playing basketball, tennis and soccer, the foundation will use the proceeds from this event to benefit area athletic programs for area youth, along with benefiting the Milton lacrosse program.

Hill said the annual event continues to grow in participation.

“We had 500 in the first year, 600 in the second year and approximately 700 in the third year,” Hill said. “This is our fourth year and we are hoping to get a thousand.”

The event will also feature a kick off concert featuring the band “Critical Incident” on Friday night.

Event t-shirts will only be ordered for those who register online at runlivehonor.com before midnight on August 1.