Written by SandpaperMarketingAdmin on February 26, 2016. Posted in entertainment. 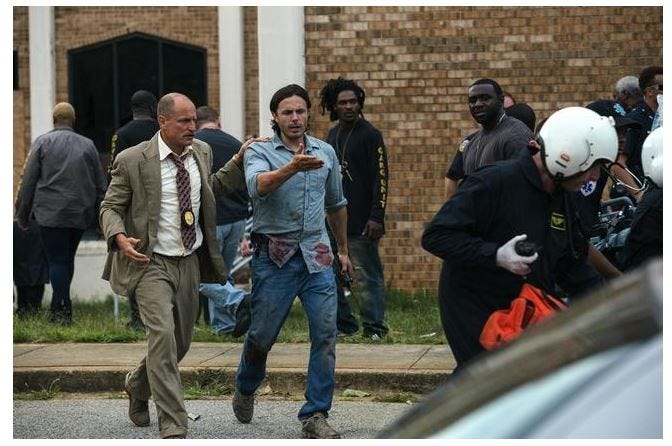 What are the odds that two longtime actor pals, who never worked together before, but each have a major hit TV series on their résumé, would eventually end up in the same feature film? Pretty good, it turns out. Aaron Paul, who starred as meth dealer Jesse Pinkman for all five seasons of “Breaking Bad,” and Norman Reedus, who’s in his sixth season as zombie hunter Daryl Dixon on “The Walking Dead” are playing brothers Russell and Gabe Welch, ex-cops who have gone bad and are involved in a heist in the new film “Triple 9.” There is actually a loose connection between Paul and Reedus, one that dips into areas of TV fanaticism. In “Breaking Bad,” Jesse manufactured and sold crystal meth that had a distinctive blue color. In season two of “The Walking Dead,” Daryl was looking through a clear plastic bag filled with medicine. At the bottom of the bag was a stash of blue meth. Yes, both shows are AMC productions, but that was no coincidence; that was a Grade A Easter egg that connected the shows. Paul and Reedus recently chatted up their new film in Los Angeles.

Q: What initially attracted you to “Triple 9?”

Reedus: [Director] John Hillcoat (“The Road,” “The Proposition”) was the first thing. When I saw that he was directing it, even if it was a dog food commercial I would have said yes.

Paul: Same with me. The first thing is who’s directing the film, and because it’s John, you know you’re going to expect some sort of dark, human story. And the script is brilliant and complex with incredible, complicated characters.

Q: You’ve both been at this for a long time, and have paid a lot of dues before gaining success. What’s been your secret to surviving?

Paul: Yeah, ramen is a trick of the trade.

Q: Aaron, is it true that you once had the job of dressing up as a frog mascot at a radio station?

Paul: That was the worst job I ever had, but I was 14 years old and making $10 an hour, which was a lot of money for me at that time. I was killin’ it! But I saw the end goal. I grew up in Idaho with no money whatsoever and I knew I was going to move to either L.A. or New York. The reason I moved to L.A. was because it was closer, and cheaper on the gas. I knew I wanted to be an actor, and you’ve just gotta fight for what you want.

Q: You had quite a few small parts, and you finally scored with “Breaking Bad.” But originally you weren’t supposed to be in the series very long.

Paul: That’s right, but that was only the plan when we were shooting the pilot. Once the pilot was done, Bryan [Cranston] and I had worked [well] together, and when they decided to pick up the series, the whole dynamic and arc of the show changed. So when they went into the writers room for the first season, instead of Jesse dying, they decided to make him a big part of the show.

Reedus: I recently found out the same thing about me. I was watching [an old episode of] “Inside the Actors Studio” I was on that I had forgotten about it. Watching it now, there was a part where [“Walking Dead” head writer] Robert Kirkman said, “Yeah, we were going to kill Daryl in Episode 4, Season 1.” And I said, “What? I only came on in Episode 3!” But yeah, that was the plan.

Q: In “Triple 9,” both of your characters are sort of playing two different characters because the plot has them each leading double lives. Was that a big challenge?

Paul: Yeah, but it was great. I always gravitate towards characters that are going through a lot. I tend to get tortured a lot, which I guess I’m just not against (laughs). What does that say about me? I just feel like I need to be beaten (laughs). I like stories that have conflict. I’m just drawn to honest, real, intense stories.

Q: There’s a lot of action in the film. Did you have to go through any special preparation?

Reedus: I shaved my chest for it because I have a big chest tattoo in the film. Shaving it was rough because it takes a good three years for it to grow back (laughs). But I was doing “Walking Dead” at the same time, so I was bouncing between sets. You know, slick your hair back, put on tattoos, go over there and be like this, then go back over there, cover yourself in blood, and be like THIS. It wasn’t crazy difficult because the environment’s so different from one set to the other.