Written by SandpaperMarketingAdmin on July 16, 2015. Posted in entertainment, local. 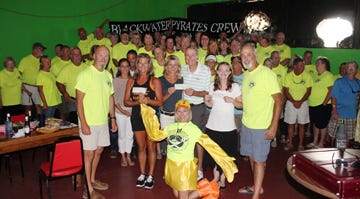 Wednesday, the Blackwater Pyrates announced the three winners of this year’s Riverfest Duck Race. Melissa Cody with Fuel Fitness won the $1,500 first place prize. Claude Duvall of Fast Cash ATM (pictured with his wife, Melanie) won the $750 prize, and Kathryn Morris, as an individual, won the third place $250 prize. Also pictured in front is Tracy “Bling” Johnson, in the duck costume who was responsible for recovering the ducks from the chute. Brad Pitman, on the left, was this year’s “Duck King” organizer; he handed out the checks during the presentation. To the right of Johnson is Captain Ralph “Dragon” Palmer. He said the Riverfest was a successful one, selling out of their ducks early in the morning.