Written by SandpaperMarketingAdmin on August 14, 2014. Posted in lifestyle. 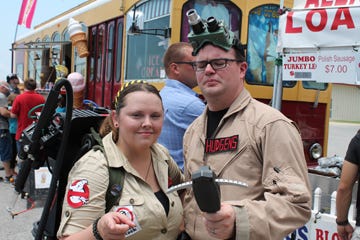 Saturday, people who do not shy from and even embrace the moniker “nerd” showed their support for their favorite movies, manga magazines, comic books, video games, and bands at Pensacola’s ParaCon: the Multi-Genre Convention. Actors such as Fred “The Hammer” Williamson from Dusk ‘Til Dawn, Robin Shelby from Ghostbusters, and Lou Ferrigno from The Incredible Hulk (the television show) appeared.

Visitors also had the chance to get pictures inside a Delorean outfitted to travel back to the future. Saturday, the air conditioner went out, but Sunday it was up again. The heat didn’t stop fans from packing the convention building at the Pensacola Fairgrounds. Fans also had the second building wherein to play their favorite card games like Magic and Fluxx.