Written by SandpaperMarketingAdmin on January 26, 2016. Posted in lifestyle. 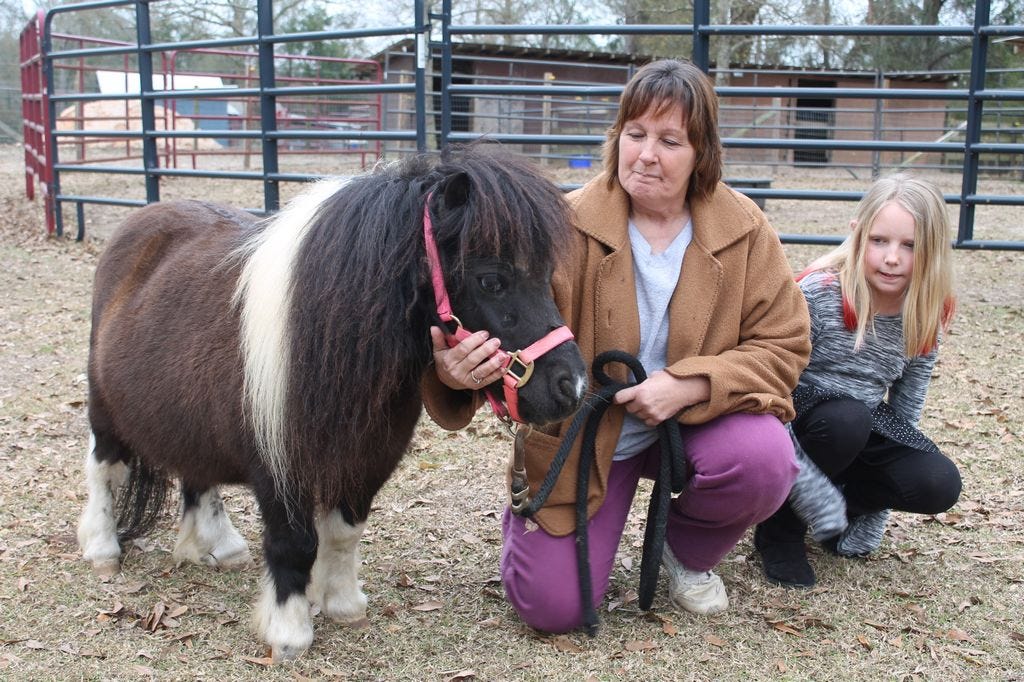 This coming Monday marks eleven years of horse rescues for Diane Lowery, co-founder with Linda Lambert, of the Panhandle Equine Rescue (PER).

While Lowery is proud of her organization’s track record and adherence to the lifetime safety net, she cringes at the thought of the next call for a critical care case with the PER facility at capacity.

PER is a non-profit rescue, rehabilitation and adoption organization for abused, neglected and abandoned horses, ponies, mules and donkeys. PER operates in Escambia county but also takes rescues from Santa RosaCounty.

Lowery started her mission in 2005 when she called to report a case of abuse. “Nothing was being done,” she said and met Lambert, who was going through the same thing. Lowery said she started researching her options from around the country and was advised to start a rescue of her own. “We’ll go as long as we have funding,” she said.

While PER operates mainly in Escambia, Lowery said their biggest rescue was in Santa Rosa County. The website tells the story among several other rescues. The horses are known as the Santa Rosa 13:

“On June 16, 2007, a Santa RosaCounty man voluntarily surrendered 13 Tennessee Walking horses to Panhandle Equine Rescue when he could not meet court-ordered compliances. These horses had never been handled, vaccinated, de-wormed, or had their hooves trimmed in at least three years. The horses were discovered by neighbors after some of them escaped their pasture in search of water and food. Two stallions were kept separate by tying them on short tethers, one to the bumper of a truck, and the other to a stake in the ground. Their halters have left permanent indentations in their faces.”

One horse from this rescue, Jumper, is still at PER. Lowery said the horses were “all wild, like deer.” She said she’s looking for a trainer who can take the time with the 12 year old male.

She said he’s had a saddle on him.

“There’s no reason he can’t be ridden.” She said if a trainer will donate the service PER can cover expenses.

Jumper’s story is one of many and with the lack of space at PER, Lowery said she’s dreading the day she gets the call of a horse in critical need and has to turn it down. She said as long as she has breath she’ll keep caring for horses, “but it’s a community effort.”

To this end, Lowery said Santa RosaCounty needs its own Global Federation of Animal Sanctuaries (GFAS) sanctioned equine rescue, like PER.

“It will take a Santa Rosa taxpayer that has a heart for rescue and is willing to step out. I will help them. If they have the land and a facility (that will be) a good start. It’s doable.”

Those who can only ride can help during the annual benefit ride on Saturday, March 19, at Coldwater Recreation Area. According to the ride flyer, “There will be several obstacles along the trail to challenge both horse and rider where the highest scores earn fantastic prizes.” Visit panhandleequinerescue.org for more information on PER and the March 19 ride.