Written by SandpaperMarketingAdmin on January 22, 2016. Posted in lifestyle. 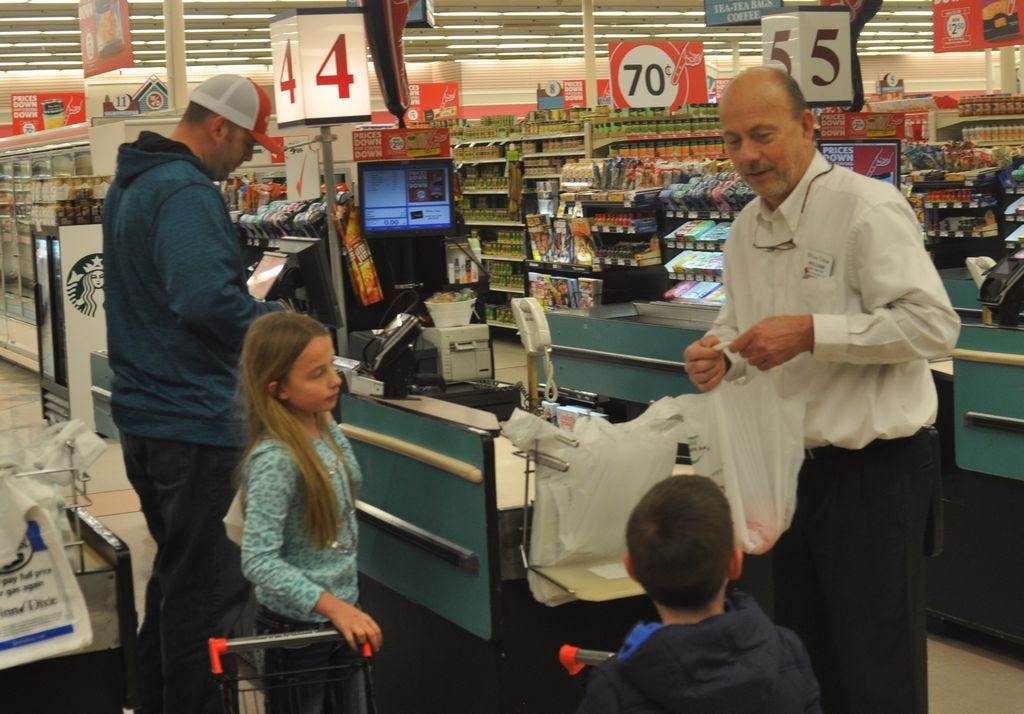 In his 45 years with the grocery store chain, William Beech has been the store manager of the Winn-Dixie in Pace since it opened 25 years ago. While Wednesday was his final day on the job, Beech recently took the time to reflect upon his career.

“I feel like things are going really good for the store,” Beech said. “So this is the time to do it.”

Beech now plans to spend more time with his wife Janet, his two children Brian and Holly and his five grandchildren. However, the decision to retire was not easy.

“That was the hardest decision that I ever made was to retire, because I was scared of not being happy,” Beech said. “What makes me happy is going to work and working 12 hours a day. It gives me a peace.”

Beech worked his way up to management with the company, by first starting as a grocery bagger at a Pensacola location and eventually working his way to management at the Tiger Point store.

“I had no idea what I wanted to do (when starting as a bagger) then I just kept going up and up in the company,” Beech said.

Upon hearing about the opening of the Pace location, Beech said he inquired about becoming store manager.

“It was probably one the best things I have ever done,” he said. “I had chances to leave and go back to Pensacola, but I said, ‘no, I like it here, I want to stay’.”

In the 25 years as manager of the Pace grocery store, Beech said he has witnessed several occasions as past employees would initially meet, eventually get married and start their own families. Beech added he has even had their children work for him at the store.

“Right now, I have three young people working for me that their parents met in here as teenagers,” Beech said.

Like himself, Beech has witnessed young employees start working at Winn-Dixie in their teens and work their way up to management. In one instance, Beech remembers hiring a 16-year-bagger at the Tiger Point location who now works for the grocery store’s corporate office in Jacksonville.

Since announcing his retirement, Beech has received numerous messages from many within ranks of Winn-Dixie, including those who have worked for him.  He summarized the feeling of reading those messages as “rewarding.”

One of the store members of management is Michael Castagna, who has worked for Beech the past nine years.  Castagna said Beech has a lot in common with the Energizer Bunny in reference to the many areas of the store he covers.

Whether it’s assisting in unloading a truck or rolling up his sleeves in order to clean the store’s public restrooms, Castagna said Beech is the very definition of hard work.

“He is a great mentor in that respect,” Castagna said.

Over the years, Beech has also seen the economy grow in Pace.

“When I came here there wasn’t hardly anything at all, just woods,” he said. “Over the past 25 years, it has just mushroomed and grew.”

Under Beech’s management, the store has been recognized on several occasions for making sales and profits through a President’s award, presented on a corporate level. Beech added the store continues to do well, even though more competition has since moved into the Pace area.

The store has also been heavily involved in the community. He said the store has often sponsored local churches, schools and organizational events.

While the successor to Beech’s position has not been officially filled at this moment, Beech suggests his replacement treat customers and staff as a second family, due to the amount of time they will be spending around each other.

He is looking forward to spending more time with family and friends along with taking some to fish and go camping. However, Beech is a little hesitant about taking the next step in life.

“People think that retirement is great, but it kind of scary too,” Beech said. “Sometimes you wonder if you really want to retire or just keep working until you drop.”

While he may no longer hold a position with Winn-Dixie, Beech plans to occasionally stop by and check in on his second family

“Just because I am retiring does not mean I am disappearing…I will still be around,” he said.