Written by SandpaperMarketingAdmin on November 24, 2021. Posted in lifestyle.

TUSCALOOSA, Alabama — The University of Alabama Million Dollar Band has been selected to perform in the 2021 Macy's Thanksgiving Day Parade, representing the state of Alabama.

Mabrie Baker of Pace will perform with the Colorguard section/position. 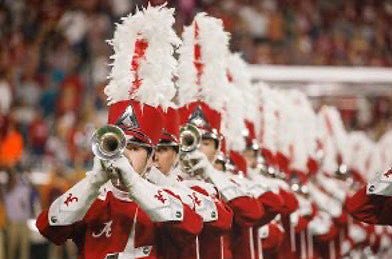 This will mark the band's first appearance in the parade. The Million Dollar Band will join the Parade to the call of "Let's Have a Parade," the iconic phrase that has signaled the start of every Macy's Thanksgiving Day Parade since 1924.

"The Macy's Thanksgiving Day Parade is one of America's iconic holiday traditions," said Dr. Ken Ozzello, UA professor of music and director of bands. "Having the opportunity to participate will be thrilling for the members of the Million Dollar Band and provide them with life-long memories."

Each year, the Macy's Parade Band Committee looks for bands that have the stage presence and the musical and marching abilities to captivate more than 3.5 million live spectators and more than 50 million viewers. The Million Dollar Band was selected from more than 100 applicants as one of nine bands to march in the annual holiday spectacle.

The band will join the revelry along with other iconic Macy's staples: floats, giant character balloons, clowns and superstar performers galore on Thanksgiving Day 2021, helping create an unforgettable experience for millions.

"When most Americans think of The University of Alabama, they may think about football, however, it is the exciting showmanship, entertaining performances and incredible music at halftime that captures our attention," said Wesley Whatley, Macy's Thanksgiving Day Parade creative producer. "The Macy's Band Selection Committee is proud to welcome the sights and sounds of The Million Dollar Band to the streets of New York City for their inaugural appearance in the 2021 Macy's Thanksgiving Day Parade!"

Performing for millions of fans each year, the Million Dollar Band has been a Crimson Tide tradition for more than 100 years, and it has become one of the most respected university marching bands in the country. The band, which is made up of more than 400 students from almost every major and department on campus, is UA's largest student organization.

For more than 90 years, Macy's Thanksgiving Day Parade has given thanks to what Macy's values most – its loyal fans. More than 5,000 Macy's employees and dedicated volunteers work tirelessly to create a spectacular event that entertains the cheerful crowds and provides joy to millions at home watching on Thanksgiving Day. Stretching down a more than two-mile-long route in New York City, the spectacle is alive with gleaming color, music and smiles.