Written by SandpaperMarketingAdmin on April 3, 2015. Posted in entertainment, local. 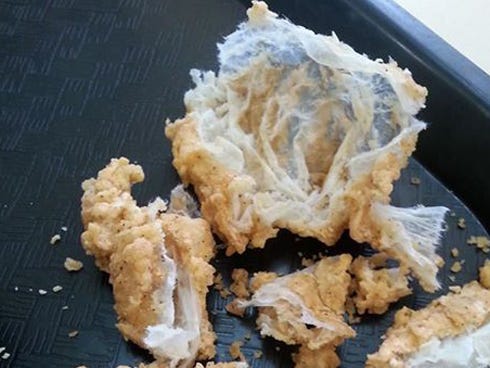 Julie White, a Milton native, did not anticipate the online reaction she received in reference to a recent trip the Milton KFC location.

White, along with her five-year-old daughter Brooke and a couple of family members, visited the Milton location on Sunday afternoon. At the time, the party of five was the only customers inside the restaurant, she said.  According to White, her daughter began to inspect of what was thought to be a chicken tender, however there was no chicken to be found.

“I noticed it was wax paper,” she said.

While dining inside the fast food restaurant, White said she brought the fried wax paper to the staff’s attention. In an interview, White states the staff found her discovery to be humorous.

“They just laughed,” she said. “They didn’t have any sympathy for the situation.”

White said the staff offered another piece of chicken to remedy the situation.

Upon reflecting on the incident, White believes she was the unintentional target of an employee prank.  She believes the wax paper was intended for an employee, however the joke could have caused her daughter harm. “Thankfully my kid did not choke, there is no telling who they could have hurt,” she said.

Employees at the KFC Milton location did not want to comment on the matter. The store’s management did provide the Press Gazette with a phone number in order to speak with the company’s public relations department. However after multiple attempts to reach a spokesperson for KFC or Yum! Brands Inc. which owns the restaurant brand, no comment was given on the matter as of this print deadline.

After previously working in the food service industry, White believes the employees should have shown more concern in the matter.

“You always take care of the guest and when someone makes a mistake or a guest is upset, you make it right,” White wrote in an online post.

“I understand that things happen. I honestly believe if they would have handled it differently I wouldn't be so furious.”

During the visit, White said she did not receive a visit from a member of the restaurant’s management.

At the time, White said she kept composure and took a picture of the cooked wax paper, which was then posted on both her personal and KFC’s Facebook page. The post on the popular social website went viral, she said.

“I never thought it would grow like this,” she said.

The posting also received multiple responses from individuals who either just provided their thoughts on the matter, shared similar incidents or gave advice on what White should do next.

In a Facebook message, White said she was able to speak with a company representative who said the matter would be looked into and she would receive a voucher in order to visit the restaurant again.

However, when interviewed White said she has no plans on visiting the restaurant any time soon.