Written by SandpaperMarketingAdmin on March 14, 2016. Posted in lifestyle. 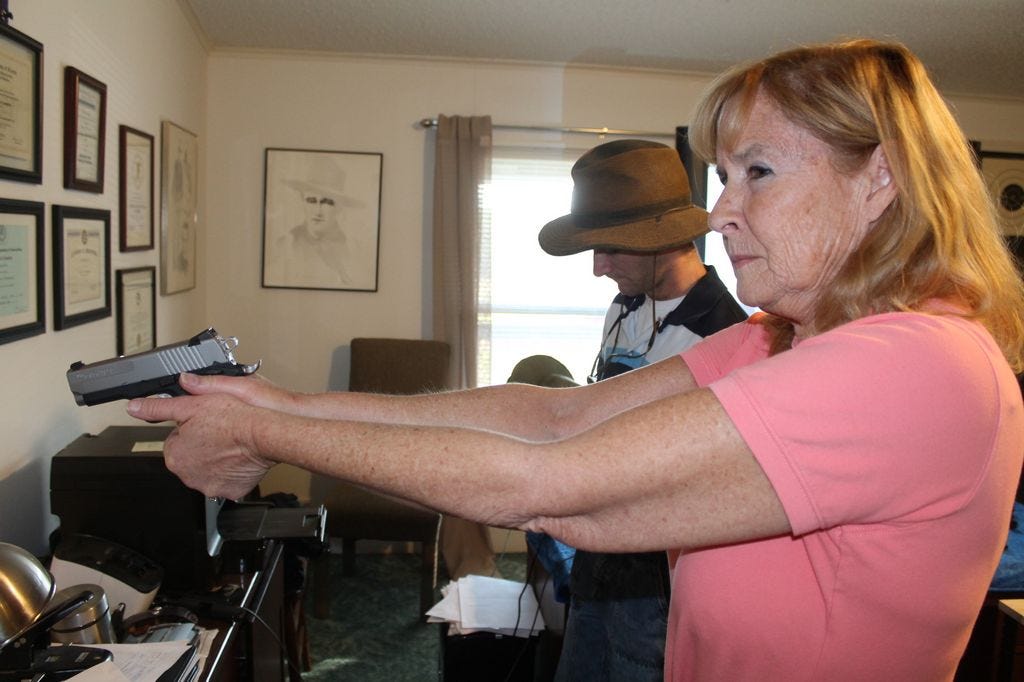 Picture yourself in the following situation: you’re visiting an elderly friend when her grandson, with a criminal history, comes with friends. Afraid, your friend denies the young man entry. An argument ensues and you decide to fire warning shots into the air to scare him off.

Were you being excessive?

Some readers may think so.

Do you deserve a 20-year sentence?

Opponents to mandatory minimum sentences would say no.

Part II of “Knowing Your Rights” looks at the bill, SB-228, signed by Governor Rick Scott, relating to just such sentencing laws.

Part I of “Knowing Your Rights” focused on an open carry bill, HB-163, and a bill changing “stand your ground” prosecution. Part II will look at SB-228 as well as a bill regarding recreational shooting, SB-130. Note, Governor Rick Scott has signed both of these latter bills into law.

Hansford said there have been incidences where this has been an issue, but couldn’t point to specific cases. However, she did say the NRA supported this bill as well as the Florida Sheriff’s Association. “It’s not meant to be any sort of gun control, per say. We're not anti-gun here. We are pro-responsible and safe gun use.”

Attorney Dan Stewart said the bill benefits law enforcement officers who heretofore had little legal backing in situations of people complaining about neighbors target shooting.  “The law, as it's interpreted by folks, makes it difficult to address by law enforcement. (Officers need) a very specific defined law or bill that says when it’s appropriate to discharge your weapon.”

Sam Mullins, Santa Rosa County Republican Party chairman and constitutionalist, said safety concerns should be in the hands of gun owners where open carry is concerned, but said he could see both sides of the issue. He said he’s done some target practice on his five-acre lot in front of 20 vacant acres, but said, “I can understand the safety aspect in an incorporated area.”

While supporting the spirit of the bill, Santa Rosa County Sheriff Wendell Hall said one detail may reduce its efficacy. He said he’s never been in favor of backyard shooting ranges, but noted one of the exceptions under section 4B, which says the recreational shooting subsection does not apply “if under the circumstances, the discharge does not pose a reasonably foreseeable risk to life, safety, or property.” Hall said the exception still makes it difficult for the state attorney to enforce.

However, Attorney James Parker with the state attorney’s office said the new rule is not hard and fast because of the exceptions in the bill, but said, “We believe it to be a good bill. We’re supportive of the new law and will take every effort to enforce it.”

Governor Rick Scott already signed Senate Bill 228 into law. It addresses minimum sentences when guns are involved or simply worn during the commission of a crime.

Stewart said, “I understand some sentences have seemed over harsh and there is a need for addressing that…You may have forgotten you have weapon on you. I have heard of this happening many times.”

The bill has been championed by groups like Families Against Mandatory Minimums (FAMM), “a nonprofit, nonpartisan organization fighting for smart sentencing laws that protect public safety.”

With the signing of this bill, FAMM’s state policy director, Greg Newburn wrote on the FAMM website, “After hearing horror stories of people sentenced to 20 years in prison for aggravated assault – 20 years for warning shots, or three years for brandishing a firearm – I made it my mission to fix this law.”

Newburn’s reference to 20 years for warning shots comes from stories like Ronald Thompson’s. In short, the now 69-year-old Thompson, in 2010, fired two warning shots to scare off a teenager in an argument with the boy’s grandmother, a friend of Thompson.

Despite the teen’s history of violence and Thompson’s 14-year Army career, Prosecutor Steve Nelson reportedly said “You can’t ignore danger or future danger to the public just because of age or some other variable.” Nelson fought to overturn the three-year term to which the first judge, Circuit Judge John Skinner, sentenced Thompson.

Three years into Thompson’s 20-year sentence, a judge threw out his case. Thompson’s only other run-in with the law reportedly was a 1988 DUI conviction.

Newburn said, “Florida has repealed a mandatory minimum sentence for the first time in more than 20 years. The result is that fewer state residents will be subjected to excessive mandatory prison sentences, and taxpayers will be spared the expense of wasteful spending.”

Parker said there are positives and negatives to the bill, but said, “I do not think it significantly changes our ability to do our job. What it does do is it gives judges greater discretion when it comes to sentencing for aggravated assault offenses. Before, we had a three-year minimum mandatory sentence on aggravated assault involving a firearm.”

Both House Bill 163 for open carry and Senate Bill 344 have reportedly died in committee while the two bills here Governor Scott signed into law. As citizens, legislators, and future governors weigh their parts in public safety and upholding the Second Amendment, the only sure thing regarding firearm law interpretation is change.