Written by SandpaperMarketingAdmin on May 20, 2014. Posted in clubs, lifestyle. 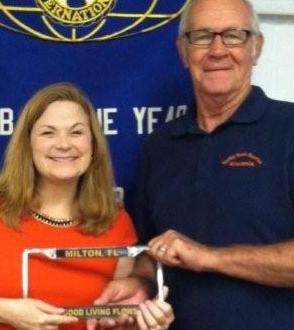 Pamela Holt, Santa Rosa Press Gazette editor and advocate for diabetes awareness was presented with the Milton Pride tag holder from Santa Rosa Sunrise Kiwanis President Jack Culberson, after her narration to the membership on diabetes.  Current statistics list 25.8 million Americans have diabetes of which 215,000 are children 10 years old and under, and 70 million Americans continue to go undiagnosed.  Pamela didn't discover she had diabetes until she was 7 months pregnant with her first child 25 years ago, thinking she was just tired and feeling rundown.  She shared she is not a medical authority, but will explain known facts and what she has learned from her years of dealing with the disease.  To put diabetes in prospective, in 2007 231,500 people died of diabetes complications as compared to 40,000 people died of breast cancer in 2010.  She stressed the importance to being aware of the signs of diabetes, knowing your own body, and once diagnosed educate your support group so they can be aware of your situation at all times.  Santa Rosa Sunrise Kiwanis welcomes all to their 7am Wednesday meetings at Tanglewood Golf Course where breakfast is served.