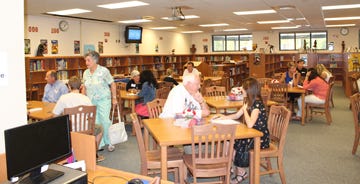 Friday’s candidate breakfast at King Middle School was special for more than the students getting an opportunity to meet those running for various offices in this year’s election. Dee Copeland, teacher and leader of King Middle’s Student Government Association (SGA), said after 41 years of teaching she would be retiring by February of next year. Copeland said she’s had a breakfast with the candidates four times so far during her career. Students, during the breakfast, took clipboards with questions, Copeland said, from the students and candidate names to tables in King Middle’s media center. Students then interviewed candidates. A student between interviews, Caleb Shelton, said, “I like how they said they wanted to help. I like how they said they wanted to bring more jobs to help the community.” “It’s a wonderful way to get involved,” Copeland said. The students can say they’ve met various elected officials, ask what they do, and ask about topics important to the students, she said. The students, she said, are so involved. “I don’t have to ask them to go up to the candidates,” she said. According to Copeland, in December, the King Middle SGA visited congressmen and presented resolutions for consideration to the state as part of District 1 Florida Association of Student Council. “Only ten resolutions passed this year and we had two of them.” The first resolution was in support of incorporating sports programs into middle school. The second was in support of adding academic courses in middle schools (grades 6-8) transferable as high school credits. “Sports keep grades and attendance up. It keeps them coming,” Copeland said. “I took political science in college. This is political science,” Copeland said.