Written by SandpaperMarketingAdmin on August 1, 2014. Posted in entertainment, local. 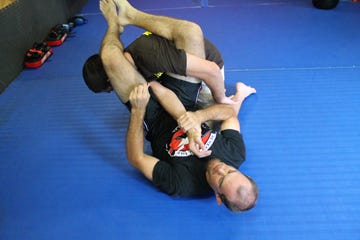 Tra Alidor, lead instructor for Team Remedy at his gym off of Berryhill Road took home 4 gold and two silver medals from his team at the Mississippi State Championship Jiu Jitsu Tournament, held by the South USA Grappling Association in Brazilian Jiu Jitsu. One of his students, Timothy Manning (in the brown shirt), took home two gold medals after training with Alidor for 5 months. The tournament, Alidor said, was his biggest accomplishment so far. “I can control and manipulate and stop somebody and they can’t do anything to me,” Alidor said.  Alidor is the Jiu Jitsu instructor for the team, but he said he also has Muay Thai and MMA coaches as well. “Now I’m focused on building the team,” he said. He said he doesn’t train for profit; he just wants to build up his team and pass on his art.