'GOD PUT HIM THERE': Friends save Milton bikers after traffic accident

Written by SandpaperMarketingAdmin on April 12, 2016. Posted in health-fitness, lifestyle. 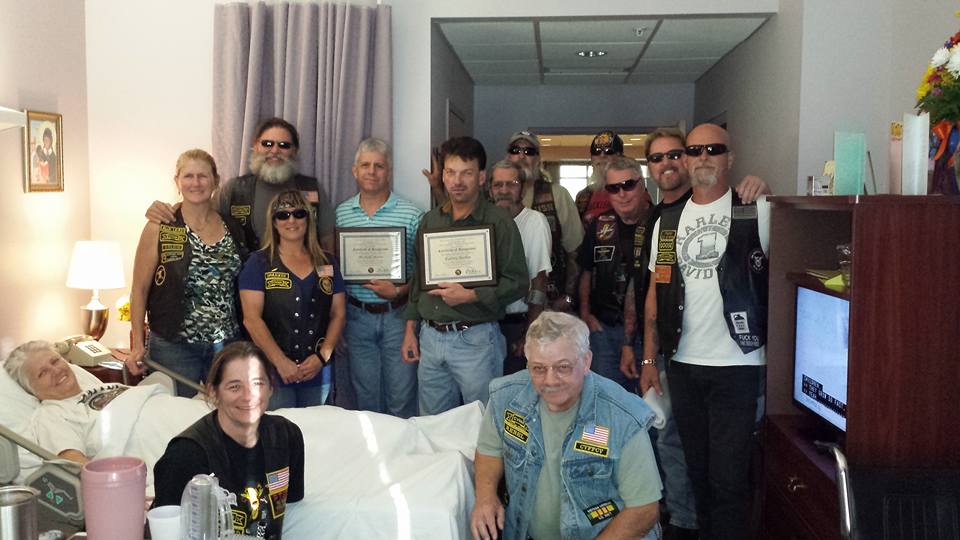 MILTON — Duke and Brenda Boutwell may not be alive today without some help from a couple of Good Samaritans.

The Boutwells were returning from camping at Bear Lake, and Michael Moore and Rodney Busbee were headed home from turkey hunting on Munson Highway when their lives crossed.

Moore and Busbee, from Escambia County, witnessed the April 2 accident, when a vehicle turned left in front of a  motorcyclist, Duke, and his wife, Brenda.

Moore said his first reaction to seeing the accident was to say, “I can’t believe I just saw that” — his second was to help. “When you see that, you’ve got to help. You’ve got to do what you can.”

Duke said after leaving Bear Lake, he and Brenda were headed to the Harley Davidson store in Pensacola.

“Saturday was the kickoff for the PTSD fundraiser at Harley,” he said. “That’s where we were going.” After the accident, “Bren,” his wife, was ejected and landed in a ditch covered in brambles and weeds face down in water.

Meanwhile, Duke remained stuck on the bike with the throttle open before hitting something and going over the handlebars and into the same ditch.

Brenda was hard to find in the ditch, Moore said, but he soon spotted her jacket and helmet.

“I grabbed her collar and drug her back to bank,” he said. “I pulled her up on me and rolled her over and held her out of the water. When I did that, she started puking up water. I sat and held her on her side until the paramedics got there.”

“I started yelling for Brenda and got no response,” Duke said. “I went into an incredible panic,” he said.

Then he heard a voice say, “I got her. I got her.” Soon after, he said, he felt someone pull him up by his shoulders, but with all his gear sunk into the mud and roots, this other helper, Busbee, made sure Duke’s head stayed above water until first responders arrived.

As for Moore, Duke said, “I can only say God put him there. That's a pretty lonely stretch of highway, on an early Saturday morning, Mr. Busbee right with him also, understanding they saw all of it and immediately come to our aid.”

Joe “Freq” Garner, chapter president, and the rest of CVMA Chapter 20-3 heard about what happened to their fellow riders, and honored Moore and Busbee with plaques Thursday at Haven of Our Lady of Peace rehab center in Pensacola.

“Rodney and I were both raised to do the right thing when the right thing is needed,” Moore said. “We didn’t expect any special treatment … We weren’t looking for recognition.”

Santa Rosa County Commissioner Don Salter and Florida Rep. Garry Duncan signed the certificates on the plaques honoring Moore and Busbee each for “bravery, courage and selfless actions that saved a human life,” the documents state.

Now that thank yous have been said, reality sets in — the Boutwells have several weeks of recovery ahead of them, according to Duke.

“My hip is totally crushed” and needs total replacement, he said. “My femur was damaged quite a bit.”

“I can’t put any weight on my right side until my doctor tells me to,” he said. “I have to strengthen my left side enough and get range of motion enough on my right side.”

Duke’s up to the challenge. As a combat veteran and former state trooper, he said he’s had lots of injuries in the past and has “gone through rehab stuff on several occasions.

“That’s the reason why people around here are fairly amazed for a 68-year-old guy (to be) fairly strong.”

Duke said his wife has debilitating breaks and fractures slowing her rehabilitation.

“That’s the reason for me to get well, so I can assist her,” he said.

“We're incredibly fortunate to even be here, and for those two guys to be back there was absolutely something I'll never be able to repay them for … They put themselves into harm’s way to save a couple people they don't even know.

“That's rare this day and time, and needs to be made noteworthy.” 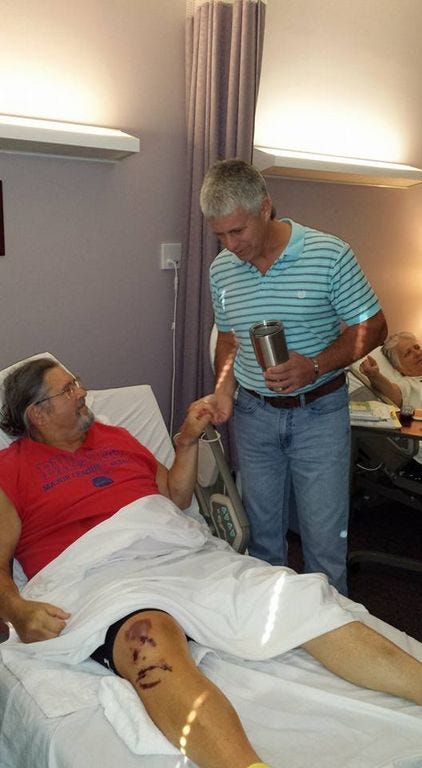 This article originally appeared on Santa Rosa Press Gazette: 'GOD PUT HIM THERE': Friends save Milton bikers after traffic accident