Written by SandpaperMarketingAdmin on July 24, 2015. Posted in entertainment, local. 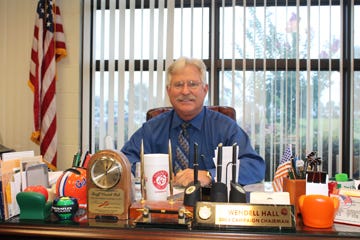 After 33 years in law enforcement, and the first Santa Rosa County sheriff to serve for four consecutive terms, Sheriff Wendell Hall is calling it quits at the age of 66. He says now is the time to spend more time with his family, travel, and take care of his mother. Thursday, Hall reminisced on changes over the last 16 years and what he hopes for the future of the county he’s served.

Santa Rosa Sheriffs Office Public Information Officer Rich Aloy and Major Killam, Santa Rosa County Jail commander previously mentioned something Hall brought up as a success of his department, treating inmates with respect. He said he had to arrest people but they were still human beings. “I didn’t mistreat them. I tried to instill being nice. It’s important to learn respect.” Hall said most of the inmates have not seen trial yet. “We’re a detaining facility, not a punishing one,” he said.

Hand in hand with respect is interfaith ministry. Hall said he’s had a lot of community support and church support. “It’s made a difference and changed lives,” he said, “You don’t have to worry about them coming back.”

Getting to this point was a tough road, according to Hall. “It didn’t happen with us over night. It took some discipline and sometimes termination,” he said. Officers found using undue force were reprimanded, he said, and if they continued disrespecting citizens they were let go.

Now, Hall said, Santa Rosa is one of the safest counties in the area, in part due to the level of training and good equipment. He said he also accredits peace to education, low taxes, and the quality of life within the county. He added, “I’m proud of our aggressive stance on drugs.”

When he started, Hall said, “there was a huge void” in officer training. At the patrol level, he said he had officers studying the law on elements such as probable cause. He said the officers were weak on testifying in court as well. Now these elements are a part of new-hire training, he said.

Hall said he was proud of his department’s achievement in becoming accredited three years ago. The standard he said helps make the division to be more professional. It was a huge milestone, he said, and one they will have to pass every year to maintain accreditation.

When he was first elected, Hall said one of his biggest challenges, and one he’s still dealing with is county growth. He said SRC grew 40 percent over the last 10 years and keeping up has been difficult, adding only two officers within the last six or seven years. The problem was the economic downturn, according to Hall. “I had a flat budget for several years. We took a decrease during the hard times and laid off several civilians and didn’t fill those vacancies.”

Getting applicants, Hall said, wasn’t hard in the early days. He said it was easier to get candidates but believes now “people’s minds are tainted by national stories.” He said it’s been even harder to find employees in corrections. “It takes a special kind of person to work in a jail,” he said.

While many people may think of changing technology as progress, over the last ten years moving up to new software was a more dramatic switch at the sheriff’s office. Hall said he found staff using a physical ledger to keep track of all of the accounting when he arrived, and noted the department processed its own payroll. He said he had to convince the department to overcome a mentality of “that’s the way it’s always been done.”

Budgetary problems in the past also reduced service to the community, according to Hall. He said almost every school had a school resource officer (SRO) in the early years, but said he’s had to slash the SRO program down to keeping SRO’s only at high schools.

Though he’s leaving office, Hall said there are some things he’d like to see his office achieve such as getting pay scales in line with other counties. “We’re the lowest paid agency in our area,” he said. He also said he’d like to see a return of the Drug Awareness Resistance Education program (DARE).

While Hall was involved with several community organizations, one of note was the Santa Rosa Kids’ House. “To see kids abused when they have no defense breaks my heart,” he said. “There were times when I would get home from work and pick up my daughter and give her the biggest hug.” He said it’s why advocacy centers are so important. Even after retiring, Hall said, “I will continue to support them and volunteer my time with fundraisers. I will stay involved.” Hall noted he’s also involved with the Santa Rosa County Chamber of Commerce, the Rotary club, the Navy League, and Navarre Seniors Association.

Hall said one of the things he wants to keep doing when he retires is cook. One year he said he sold 190 Boston Butts he smoked, while this past September he had a fish fry for the Navarre Senior Association. When he’s not cooking and spending time with his family (three daughters, two step daughters, two step sons, 13 grandchildren, and a 98-year-old mother), Hall said he loves to bass fish and looks forward to travelling in his motor home with his wife, something he couldn’t do for more than a few days as sheriff.

Hall expressed concern over the future of the county with a new sheriff. “I want the office turned over to somebody with dedication. My goal is to make sure the office goes to the right person.” Hall said he does have a major in his department in mind for the next sheriff and added he does “plan to stick around as an advisor.”