Written by SandpaperMarketingAdmin on September 2, 2014. Posted in lifestyle. 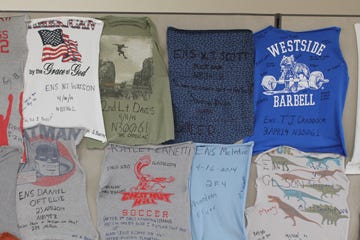 Wednesday, I posted to my personal Facebook account, “I flew a plane today.” To give readers an idea what a student’s first day in flight school is like, Alan Buskirk, assistant chief flight instructor for Trident’s flight school, took me through an abbreviated preflight check and my first officially logged hour of time behind the stick.

While the director of maintenance, Don Turtell, oiled up the plane and did his proper checking before our flight, Buskirk spoke about Trident’s current operations and future plans. The military, he said, uses Trident for IFS, Initial Flight Screening, which examines students’ study habits, ability to multi-task in a plane, and sheer physical ability to handle the motion of flying. The program, he said, lasts about 30 days with 2 weeks of academics and two weeks of practical application in the air. Students finish the program by passing a stage check and three solo, full-stop landings.

Trident takes mostly military students, but Buskirk said he has a few private students. Civilians, he said, learn mostly for the purpose of taking the family on rides and vacations. “There is a future here for a career, with airlines, skydiving, or banner flying,” he said. Crop dusting requires so much specialized training, he said, Trident doesn’t do it, but they do offer various ratings such as flying in weather and night flying.

As previously reported, Buskirk said Trident just received M1 certification, meaning the school will be able to take foreign students, a benefit to Santa Rosa County since they’ll need to eat, sleep, and recreate in the county. Trident, Buskirk also said, is looking to take on more civilian students after the new teachers arrive and extra classrooms are built.

Before the preflight check, Buskirk went over the various maneuvers students first learn such as takeoff, power on and power off stalls, turns around a point, and unusual attitudes. Power-on stalls, Buskirk said, simulate losing power during takeoff while power-off stalls simulate power loss and diving toward the earth. The experience was a rush feeling the plane slow from 100 knots to 50, and the nose drop. Buskirk said students need to be able to keep their heads enough to go through a quick checklist of solutions to engine trouble before looking for emergency landing space. He said those students may buzz a beach or actually land in an old airfield for power loss training. The unusual attitude maneuver, he said, is when the instructor puts the plane in an odd position in flight while the student cannot see, and then the student has to determine the position and correct the plane.

I sat behind the pilot’s wheel, camera around my neck, phone in my lap, and hearing my instructor speak and additional pilot chatter through the headset. Buskirk sat in the right hand, instructor’s spot. Takeoff was exciting. Buskirk cranked the power higher while waiting to taxi, and soon we were rolling. He let me take the stick and we lifted off as I pulled back. We flew over the Blackwater Bay and Pensacola Beach and got a view of Garcon Point Bridge. In between photographing, Buskirk let me get a feel for turning, which combined the two rudder pedals and the yoke, the control wheel. Turning the wheel rolled the plane left and right while pushing and pulling it brought the nose skyward and down to the ground.

Of course describing the controls is not the same as feeling them. Flying was both smoother and bumpier than driving a car. The Johnson bar, what looked like a parking brake between the seats, Buskirk used to stabilize the plane. He said pilots can check and mark maps with as stable as a plane can fly even without auto pilot. The bumpy part was the turbulence. A Lifeguard helicopter a safe distance away created some waves as well as areas where hot air met cold. Until I could control the plane better, keeping the nose steady was also tricky.

Buskirk offered to let me land, but with a job to do I took more pictures. Both in takeoff and landing, the single-engine orange and white was smooth as silk.

I marvel at Buskirk’s position. I’ve taught guitar and had students learn to make music. Still, what can compare to giving another human being wings? No thanks can be enough for the opportunity Archie Collum, senior partner at Peter Prince Airport, gave me for an experience of a lifetime. Buskirk, with experience in flight instruction, flying banners, and doing live organ flight as well, could not have been more helpful or professional.

My biggest surprise was the feeling itself and how it still affects me to write about this once in a lifetime experience. To paraphrase the pilot, Wash, from the television show, Firefly, “I was a leaf on the wind.” I flew. I was 2,500 feet over Santa Rosa County in a Piper PA-28, identity number 9163Z. Buskirk controlled the plane 99 percent of my hour in the sky, but I flew. One way or another, I will fly again.