Written by SandpaperMarketingAdmin on September 11, 2015. Posted in family, lifestyle. 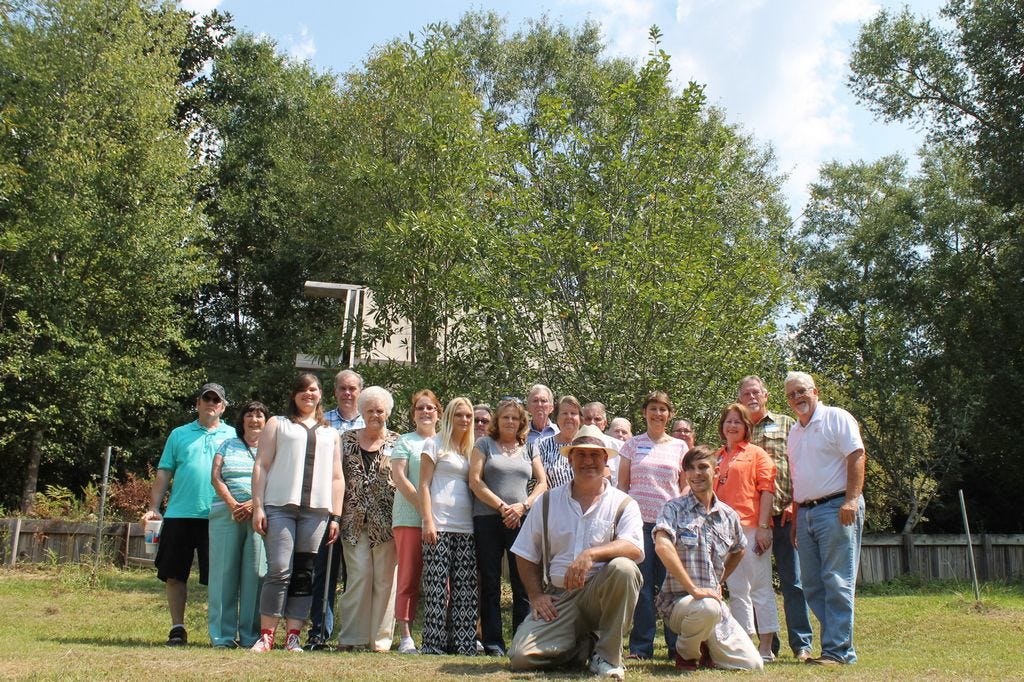 The Shell Family Reunion at Clear Creak Farm, owned by Ray Davis, is a milestone on a journey connecting a Civil War veteran in Alabama to an apple nursery in Africa. Roughly 20 direct and indirect descendants of Greenberry Henry Shell gathered at Clear Creek Farm to share stories and pictures of their family, and see the farm growing apples first cultivated by their ancestor born in 1841.

Sherry Grachis said she first started researching her family history through ancestry.com and discovered the connection to Shell. She said she only learned a year ago her ancestor had developed the Shell apple tree. Using Facebook, she created the Shell Family History page, which led to finding more relatives. She said the page grew from four followers to 60 in two weeks.

Grachis said the Santa Rosa County Extension office connected her to Ray Davis. Davis said another Shell descendent, Billy Reeves, only a year before had contacted him as well and made a trip to his farm. “It’s important to keep history,” Grachis said. “You need to remember the people before you.” She said she plans on more family reunions in the future and is considering some kind of monument to Greenberry Shell in Appleton, Alabama, the town named for the man.

Billy Reeves said he learned about Greenberry Shell through an old article from the Brewton Standard written by his great grandmother Mary Jane Richburg about the history of Appleton. “Green is my great great great grandfather,” he said. “I started doing research and got in touch with Daniel Mullins, now retired. He was the horticulturalist for the county. I learned Ray grafts the tree.” He said he met Davis and his wife, Wanda, last year when his family visited the farm. Reeves said he found research on southern apples having a Native American connection and knew Shell’s mother had Native American heritage. “I don’t think anybody knows where the apple is from,” he said. Reeves said he is working on the research for his daughter.

Nelson Cain was the oldest relative at the reunion, born in Appleton, “right above where the Shell apple orchard was,” and is the great grandson of Shell. He said he traces back from his mother, Ellabelle Shell-Cain, to her father, John Madison Shell, to his father, Greenberry Shell.

Ellabelle’s father died when she was seven years old and her mother died in childbirth, and so she went to live with her grandfather, Shell, according to Cain. He said she went on to marry her 23-year-old husband when she was just 12. “Back then people were more grown than they are today,” he said. He said her husband worked for Shell and talked about how Shell used a cider press to turn apples with scars into cider he would haul to Brewton to deliver by the train, a history he says he learned from his mother.

Blake Arant, a great great grandson of Shell at the reunion said, “Without Facebook, this would not have happened.” He said there have been family reunions before this one and credited social media with bringing so many descendents together. Arant said Shell is “the Johnny Appleseed of our family.”

Reeves said in his discussion with Davis, he learned how the Shell apple is making its way across the Atlantic to Uganda, Africa. Soon after Reeves’ initial visit, according to the Clear Creek Farm website, Davis writes, “I was contacted by Blake Thaxton, the present Santa Rosa County extension agent and good friend told me that Kevin Hauser of Kuffel Apple Nursery in Riverside, California was looking for scion wood from this heritage tree to send to their sister nursery in Uganda, Africa since the climates and the chill hour requirements are similar in Appleton and Uganda. And that friends and dear readers, is how Mr. Green Shell's Alabama apple tree will make the journey half way around the world when I harvest and send scion pieces to Africa this winter.”