Fall lineup announced for Bands on the Blackwater

Written by SandpaperMarketingAdmin on June 29, 2015. Posted in entertainment, local. 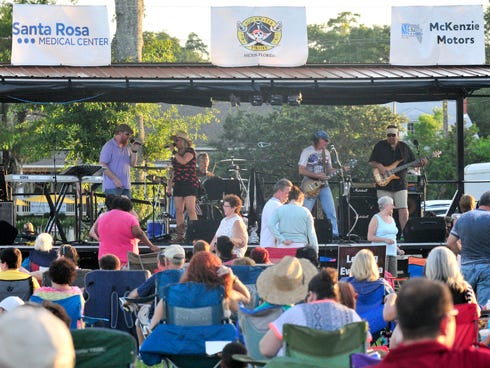 The series will take a brief hiatus to wait for the weather to cool before things heat up in Milton on Friday nights with seven concerts starting Sept. 18 and concluding on Oct. 30.

The fall season will start off with a special twist when the music returns to the Blackwater River as Oliver’s Twist is set to kick things off for the fall season.

Oliver’s Twist is just one of five new bands making their Bands on the Blackwater debut this fall. The other bands are The Blenders (Sept. 25), Hushpuppies (Oct. 2), The Bay Bridge Band (Oct. 9), and Still Standing (Oct. 23), which is a tribute band to Elton John.

Making their returns to Bands on the Blackwater this fall will be the Chris Martin Band (Oct. 16) and Not Quite Fab (Oct. 30), a Beatles tribute band.

Bands on the Blackwater is looking to close out its fourth season on Oct. 30.

“We have been listening to the people of Milton,” said Kyle Kemp, events coordinator with the City of Milton Parks Department. “They ask us each year to extend the concert series and tell us how much they enjoy coming to historic downtown Milton for the bands, so we are answering the call for more bands.”

One of the reasons for the break this year is past experiences when concerts are scheduled during the summer months of July and August.

“The reason for the break you can say is a lesson learned from last year,” Kemp said. “We tried to extend the concert series by five weeks last year, but Mother Nature would not cooperate. With that in mind, we decided to take the unpredictable rainy season off completely and come back in the fall.”

The City of Milton along with members of the Milton Downtown Redevelopment Advisory Board (DRAB) are looking to make downtown exciting for everyone in the local area.

Another addition is the opportunity for food and beverage vendors to be a part of the concert series. “This is the first year we have tried vendors and the response from everyone has been great,” said Kemp. “We are very excited to see who wants to become a part of the successful events we are hosting downtown.”

The concerts will once again be held on South Willing Street in historic downtown Milton from 7 – 9 p.m.

“We invite everyone to come out and enjoy a great family night of musical entertainment,” Kemp said. “We cannot wait to get things started for the seven concerts this fall.”

Also you are invited to follow the City of Milton and this event along with several others on its Facebook page – https://www.facebook.com/BandsOnTheBlackwater. This page features updates on the bands, photos from previous concerts, and a lot of great information.

Don’t forget to check out our website for information regarding all city sports and activities at www.ci.milton.fl.us or contact the Guy Thompson Community Center at 983-5466.

Fall 2015 Bands on the Blackwater Schedule

Sept. 18 – Oliver’s Twist – A change from the norm is provided by this awesome band with its very strong Motown roots and sounds. Adults can turn back the hands of time to musical periods like the “Summer of Love” and many more.

Sept. 25 – The Blenders – This four piece group is best described as a soulful groove biscuit with jazz gravy and a pinch of funk on the top. BAM! The Blenders.

Oct. 2 – Hush Puppies – A southern rock band that will charm you all evening long with their renditions of classic rock, country, and southern rock hits.

Oct. 9 – The Bay Bridge Band – No need for boats horns this week as the hits of the 60’s, 70’s, and 80’s will be powered by a full horn section, awesome vocals, and hot guitar licks thrown in as they span the decades of music.

Oct. 16 – Chris Martin Band – Chris Martin is an up and coming singer/songwriter/guitarist from the Emerald Coast of Florida, featuring a special sound of “blue-eyed soul” mixed with a special “Nashville drawl”.

Oct. 23 – Still Standing – This Elton John tribute band will entertain you with the music of Sir Elton. Sit back and remember the images of the 70’s and 80’s when wild style and big sunglasses were the thing.

Oct. 30 – Not Quite Fab – This Beatles Tribute Band from Pensacola, Fla., will help you relive the music made famous by the Fab Four at the start of the British Invasion.

Interested in becoming a vendor at Bands on the Blackwater?

Contact the City of Milton’s Event Coordinator Kyle Kemp at 983-5466 for more information.