Written by SandpaperMarketingAdmin on June 3, 2014. Posted in lifestyle. 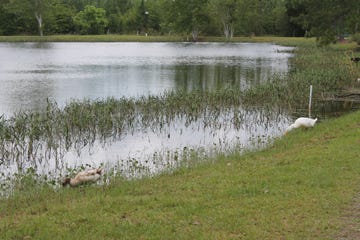 Nestled in the pines, a stone's throw from Bob's Canoes, Glen Baxley manages the long-term campground at Lake Kristina. Traveling along Munson Highway, the peaceful atmosphere makes a traveler take a second glance. Baxley says he's been in business since 1987. However, he said, "The camping world changed greatly." He said many senior citizens have taken to living in campers. Baxley described the Lake Kristina residents like a neighborhood. Some have lived there for seven to ten years he said, and they help take care of the grounds. "If anyone is looking to stay over a month,” he said, "we're happy to have them."