Written by SandpaperMarketingAdmin on March 15, 2016. Posted in lifestyle. 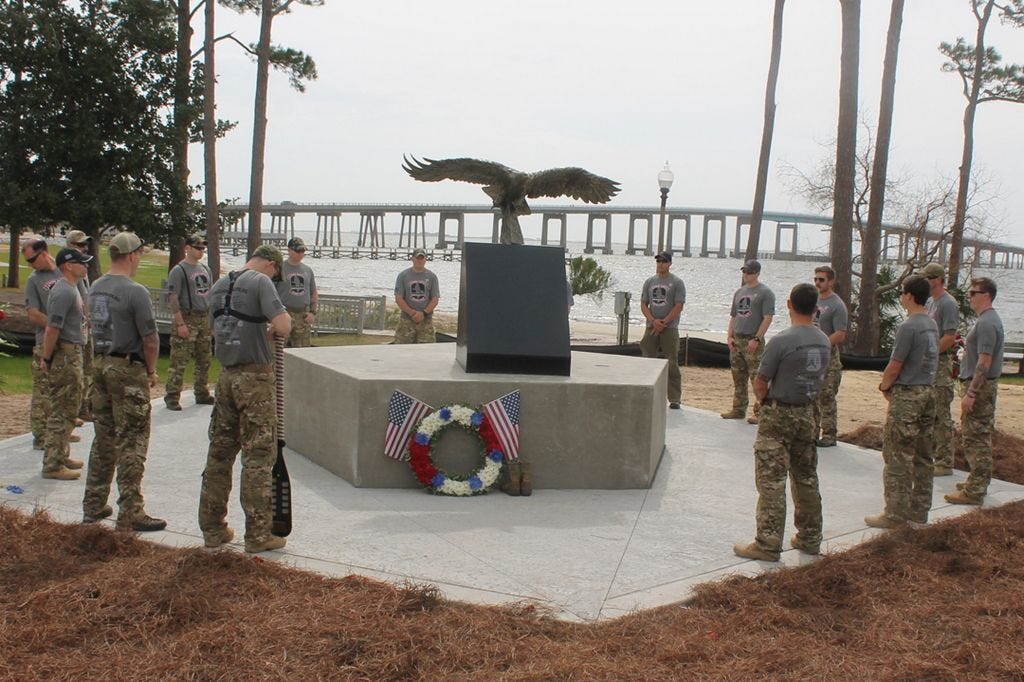 Navarre Park was the site of a series of solemn, heartfelt gestures, Friday, honoring the one-year anniversary of the tragic death of the seven Marine Raiders lost March 10,  when the UH-60 Blackhawk helicopter crashed into the Santa Rosa Sound during a night training mission.

The four National Guardsmen piloting the aircraft also died. The primary event was Leadership Santa Rosa (LSR) Class 29’s presentation of the Navarre Blackhawk Memorial class members had been working on the day they learned of the crash.

Speaking during the ceremony, Santa Rosa County Public Information Officer Rich Aloy recounted his experience as Class 29’s spokesperson, moving from preparing for a trip to Tallahassee with LSR to speaking to the nation about this tragic event. Aloy spoke of how the first responders, military members, church members and other community residents came together to support each other during those three days of search efforts.

Remembering the way people showered love and support on everyone involved in the search efforts, Aloy said, “I remember there was a little girl that showed up with cupcakes and cookies she had just baked. This had continued for three days.”

Randy New was the artist who designed the memorial itself. Although unfinished, officials decided to reveal the monument in order to recognize the anniversary.

The unique part of New’s design was the way he allowed the family members to take home a piece of the memorial. It featured a circle of 11 stars for each man lost. Eleven members of LSR Class 29 took a star from the memorial and presented it to the family of each lost soldier.

At the closure, with the start of the march, fourteen Marine Raiders from Camp Lejeune, N.C. rucking in a relay style march over the course of 11 days. According to the Marine Raider Memorial march website, “Starting from the crash site in Navarre, FL, the men will be divided into seven two-man teams, with each team averaging 11 miles before the next team takes over. The Marine Raiders will cross from Florida into Georgia and South Carolina before ending at Stone Bay on Camp Lejeune, covering a little over 770-miles total.” During the march, ruckers will carry a single boat paddle, which was found in the wreckage last year.

The most expressive moment may have come from Staff Sgt. Nathan Harris, the director of the Marine Rucker Memorial March, when he received a flag flown during the recovery efforts from Tom Lloyd, Santa Rosa County Emergency Management Operations Chief.

Harris said, “I’d like to say I’m accepting it on behalf of you guys. It’s going to stay with the paddle. I’m going to carry it with my ruck the whole way back, and as these guys grow up (indicating the young children of the lost soldiers), as they want to find out who dad was they can come see the paddle and this flag and these patches and hopefully find out…how much they meant to us. Let’s bring it home.”

Harris also helped Michelle Tucker, a LSR Class 29 member, lay a wreath at the foot of the memorial, before the ruckers set out on the first leg of their journey.