Written by SandpaperMarketingAdmin on April 3, 2014. Posted in clubs, lifestyle. 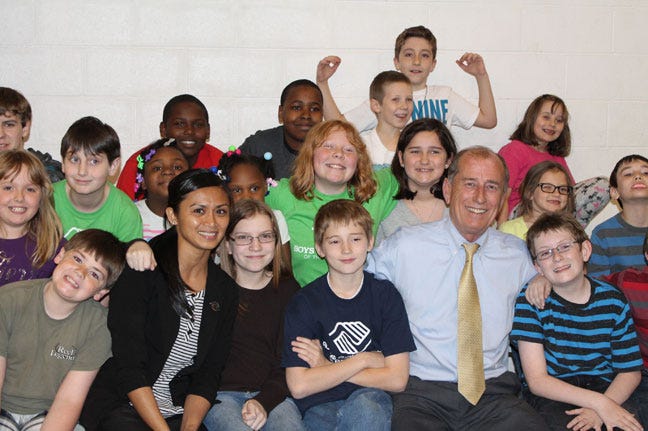 "The Boys and Girls Club," Cassie Blanton in marketing said, "is a place where people can drop their kids off after school." She said, "The focus is on academic success, healthy lifestyles, and good character." Blanton said the club serves mostly low income and single parent families. She said there is a small fee to attend, but some families apply for a scholarship to have a child attend. Blanton said the club is a place of positive influences where children grow and develop each other.

During Boys and Girls Club (BGC) Week, March 23 to 29, knowledgeable young tour guides took guests from one BGC section to the next, explaining how the activities promote the three values Blanton mentioned. Two of the guides were Breanna Sweeney, 9, and Dominic Lucas, 10. Sweeney said they usually act as front desk assistants. She also said, "I get to help kids. The kids are really nice. I like being a good citizen."

During the beginning of the tour, Lucas pointed to a board highlighting BGC members, and spoke of an autistic peer, Brent Morgan, winner of the most creative club member for 2014, and said he could draw Batman well and Morgan's Empire State Building in Legos really impressed him.

The first stop on the tour was to see volunteer Michael Morgan, known to the youth as Mr. Mix. In his room during the tour, several youth sat before computer screens playing various educational computer games. On a larger screen, some club members took turns playing the popular computer building game Minecraft. Morgan said this was a moment of down time for the youth, but they were still learning computer literacy. Morgan said during Power Hour, members get their homework done. Cassie Blanton in marketing said the club has mentors and tutors for the hour focused on academic success.

The second stop on the trip was with volunteer Jeremy Tolbert in the gym promoting healthy lifestyles. Tolbert said, "The different team activities incorporate life decisions." Tolbert had the youth active and excited with a game of dodge ball.

The end of the tour met Ruth Lichtenwalner, the volunteer covering good citizenship. Lichtenwalner said good citizenship encompasses five areas: safety, having fun in everything, supportive relationships, open opportunities, and recognition. She said, "If you're not safe, you can't get anywhere. No one will hire you." She also said she regularly picks up books from the Waterfront Rescue Mission the youth will enjoy. She also said she encourages the youth to write creative stories. Lichtenwalner said supportive relationships means solving conflicts among friends in positive ways. She said she encourages members to look to the future and see each other as potential business contacts or maybe employees. Recognition, Lichtenwalner said, meant not only being recognized as "youth of the month," but also recognizing each other and teaching a "how can I help you?" attitude.

Blanton said other than the activities at the club, the youth go on field trips to museums, movies, and the Gulfarium. She said the club also emphasizes volunteerism. Some of the youth at the Milton campus, she said, have done planting and beach cleaning.

During the tour Tuesday, Mayor Guy Thompson stopped in, took the tour, and read a proclamation declaring the week officially Boys and Girls Club week. He told the youth, "It's very important to make the right choices." He also said, "You can be me. You can be mayor one day. You can be better than that." One member in the audience asked, "Is being the mayor fun?" Thompson said, "Being mayor is fun because I get to meet you."